Oops! It appears that you have disabled your Javascript. In order for you to see this page as it is meant to appear, we ask that you please re-enable your Javascript!
Home > Firmware > Download Lenovo K3 Note Android 6.0 Marshmallow update (official OTA) 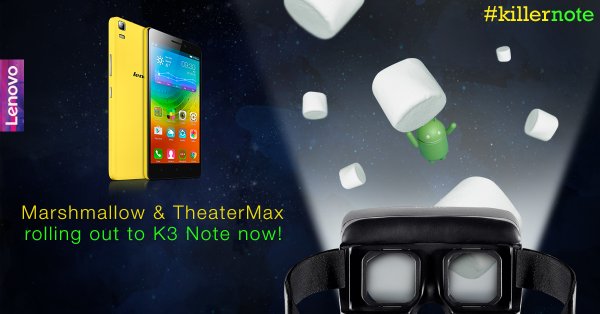 Back in January, Anuj Sharma, Lenovo India Product Manager for smartphones already hinted by showing images of the device running a test build of the new Marshmallow firmware. Since then there was no news regarding when K3 note receives update, until today where users claims that they have started receiving update via OTA. It is about 1657MB in size and carries the build number K50a40_S121_150813_ROW_TO_K50a40_S322_160314_ROW. Make sure you have connected to high speed internet (say WiFi) while downloading the update.

According to Lenovo official upgrade plan for its smartphones and tablets, the Marshmallow 6.0 update for Lenovo K3 Note was scheduled for an April roll out. Considering that, it is quite an early release. Company still have to confirm the time frame for Lenovo A7000, A7000 Plus, Vibe Shot, Vibe K4 Note, Vibe P1, Vibe S1 and Vibe X3 handsets.

You can manually download the OTA update file from the following link and flash it through recovery. To remind, the update also brings Android Security patch for March 2016.

Already installed the Marshmallow update on your Lenovo K3 Note, then do share your experience in the below comment box.