Oops! It appears that you have disabled your Javascript. In order for you to see this page as it is meant to appear, we ask that you please re-enable your Javascript!
Home > Android > Download Lenovo A7000 Marshmallow Update

Lenovo today started rolling out Android 6.0 Marshmallow update to its mid-range smartphone, the Lenovo A7000 in India. This is the major software update and is currently rolled out via OTA (over-the-air). So, do you own Lenovo A700 Smartphone? If yes, then you will soon see an update notification on your device display. You can also manually check for it by heading to the Settings menu > system update. 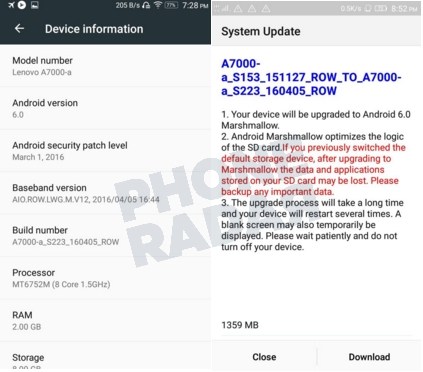 Earlier Lenovo K3 Note, the popular smartphone in the Rs. 10,000 category has received the same firmware update. The new Android 6.0 update for A7000 also covers Android security patch for the month of March 2016.

The update weighs about 1.3GB, so make sure to free up the space on your device (up to 2GB) before downloading and installing the update. Also make sure to use high speed internet connection (WiFi) and backup all your important data as there are changes of data loss.

The update lets you enjoy some Marshmallow features like better app permission which let you select individual permission between apps and doze mode which improves the battery performance.